I was invited by Ruby Silvious to participate in this exhibition at the Atlantic Gallery in Chelsea. My work on the left was chosen to respond to her print, on the right. 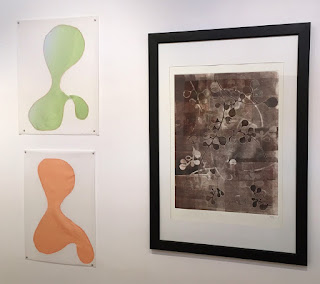 Ruby Silvious and Mimi Czajka Graminski are showing works inspired directly or indirectly by a recent Matisse exhibition. The connection was an indirect one stemming from the images stored in the subconscious. Both artists were influenced by the cutouts of Matisse but they took that inspiration in different directions. Silvious’ forms, while abstract, have references to Matisse’s botanical shapes. Graminski’s are also undulating and bulbous but they have a figurative quality. Both Ruby Silvious and Mimi Czajka Graminski reside in the Hudson Valley and are known for their 2 and 3 dimensional work.
Posted by mimi at 10:57 AM No comments: Links to this post